5/5
The penultimate stop of Roger Clyne and the Peacemakers Fizzy Fuzzy Big and Buzzy 20th anniversary celebration pulled into Boston and The Middle East on Saturday October 22nd. Outside, it was cold and windy, but downstairs the gathered crowd was about to be transported to the Arizona desert, and back to their youth. The Middle East was one of the smaller venues of the tour, but those lucky enough to get in were a loud and raucous bunch. The club itself almost reminded me of the speakeasies of the 1920s, you enter off a side street near the back, then wait to be let through a pair of black doors into the basement below. Once inside, you are met by two bars, black walls, low ceilings, and standing room only. The bars were well stocked, and the bartenders fast and friendly. For such a small place with such a big act, there was only one problem that affected the crowd. Due to heavy rains, the drainage system backed up, causing a cascade of water to flow from the ceiling at the rear of the stage, leading to a delay of about half an hour and forced the closure of the downstairs bathrooms.
Roger Clyne, Nick Scropos, and Jim Dalton on the stage at The Middle East in Boston.
Back to Music
Andrew Leahey and The Homestead shook the foundations with an electrifying set 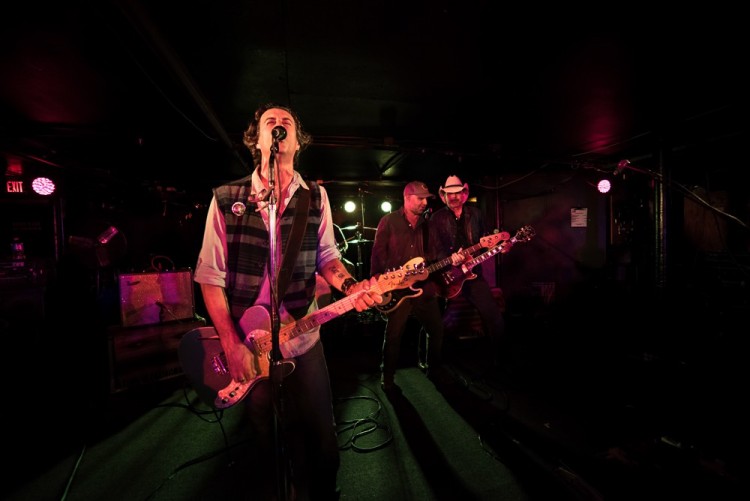 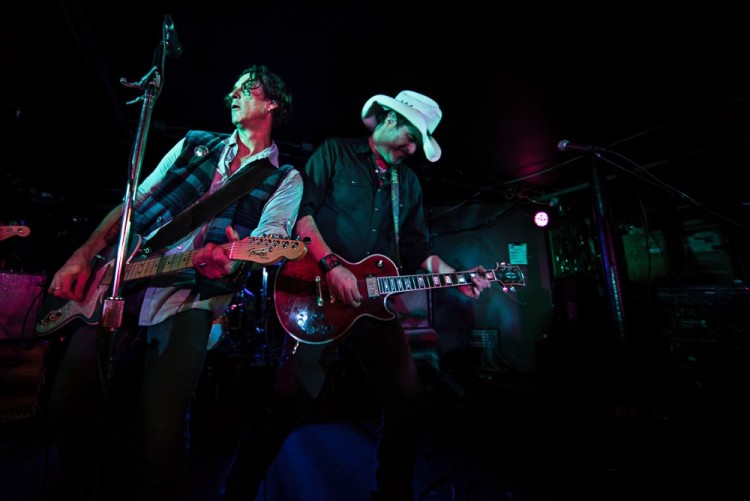 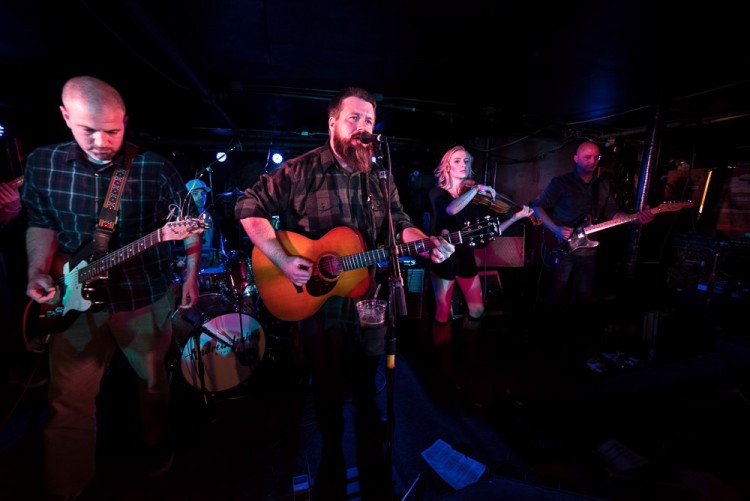 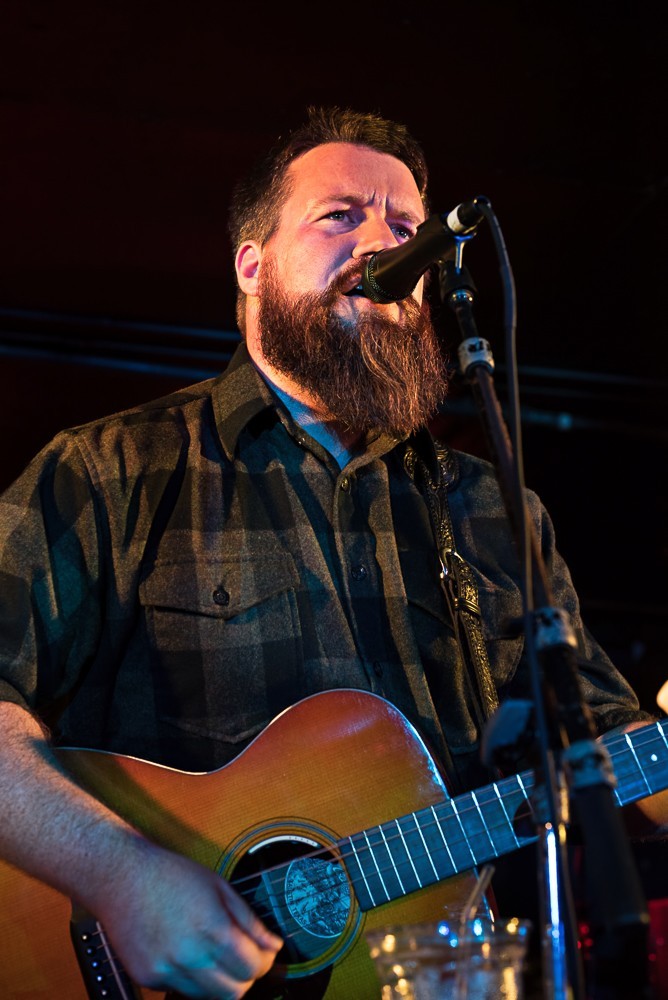 James Chiarelli, Shaqed Druyan, Daniel Miller, Cat McDonald, Bob Nash, and Philip Chuah (not pictured) of Daniel Miller and The Highlife got the night started off right.
When a headliner has two opening acts, one of them a local band, there is always the danger that one or both of them won't be up to the crowd's expectation, and the energy will be drained from the room before the show really gets going. That wasn't the case at all on this night. Daniel Miller and The Highlife brought their alt-country sound to the stage and immediately had the more than five hundred in the club making noise and enjoying the music. Miller has a strong, yet melodic voice, and coupled with two more guitars, a violin, bass, and drums the night got off to a very loud start. A little more than half way through his set, Miller let us know that his bassist and drummer had only been with the group for two practices. If he hadn't said anything, we never would have known. The bass was solid, and Philip Chuah added some really interesting licks during the band's final song, "Smokey Mountain Stomp". Shaqed Druyan on drums was equally impressive during his fills in the same song. His high energy performance was entertaining and had the crowd screaming their approval. 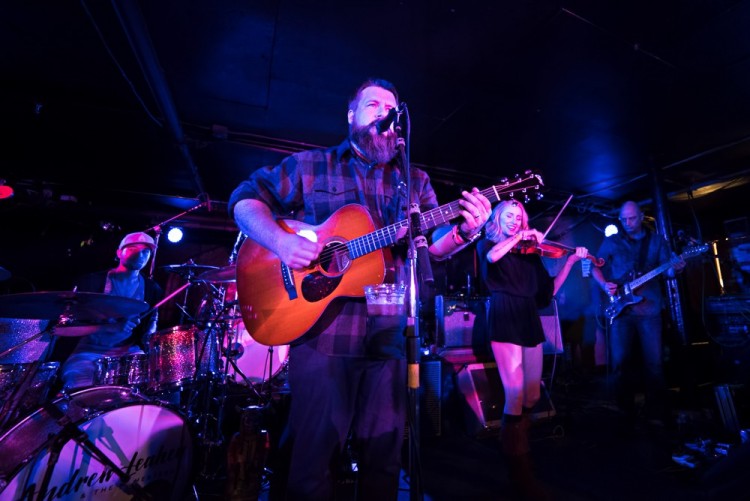 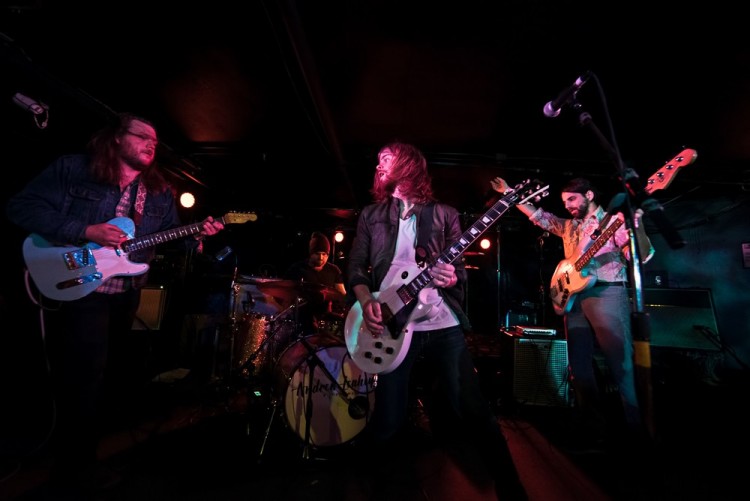 Andrew Leahey and The Homestead were up next. Leahey has been with RCPM on this leg of the tour, and delivered another strong performance. Playing mostly songs from his latest album Skyline in Central Time, he and the band were giving it all on the cramped stage. Highlights, as in Philadelphia the week before, were "Silver Linings", and "10 Years Ago", but near the end they took a detour from their set list with a rocking cover of Tom Petty's "Running Down a Dream", which I thought was a great fit, both for the band, and the crowd. This band is a lot of fun, and really performs well. Leahey cut his own set a little short in order to get Roger, P.H., Nick, and Jim on stage as close to on schedule as possible. 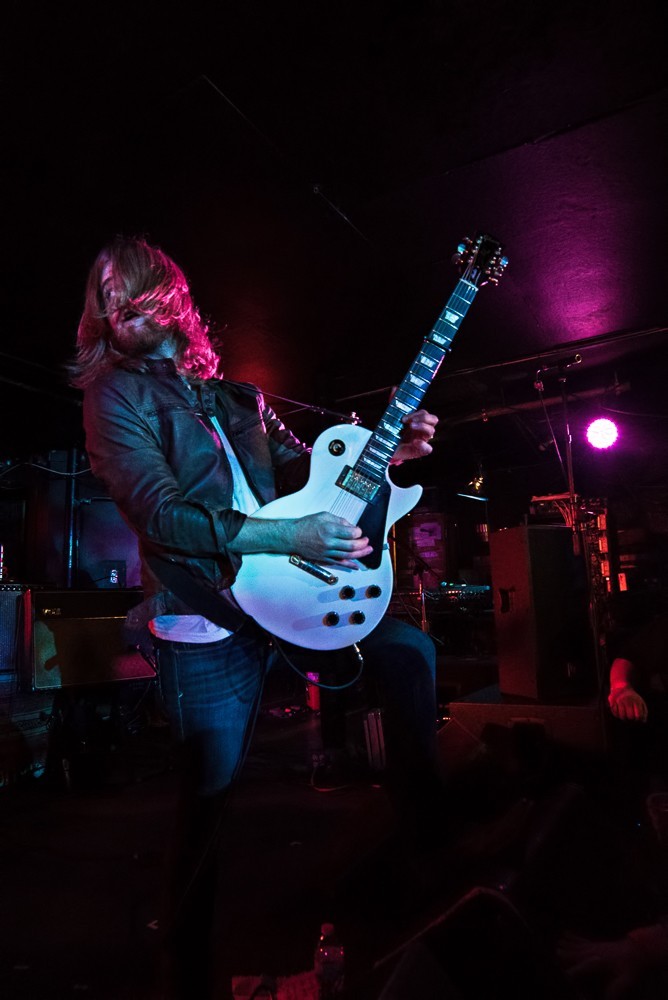 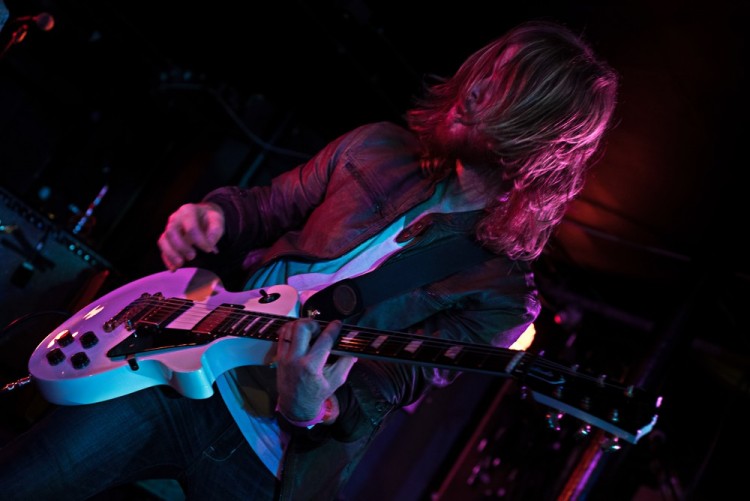 Jason Boots, Nick Scropos, Roger Clyne, Jim Dalton and P.H. Naffah (not pictured) of Roger Clyne and the Peacemakers brought their brand of southwest rock to Boston.
As soon Roger and crew began, things defied the odds and got even louder. This was easily one of the loudest shows that I've ever attended. Once again, the night started with Fizzy Fuzzy Big and Buzzy in its entirety, and no sooner than "Blue Collar Suicide" had begun, it seemed as though we had finished with Side One, and Roger was "waiting for the tape to run out" so Side Two could begin, and with it, crowd favorite "Banditos". It appeared as though most in the audience were longtime Refreshemnts and RCPM fans, and knew nearly every word to every song, and occasionally Roger just took a break and let the crowd sing a verse or chorus. As the last refrain of "waiting for that cold, black, sun cracked, numb inside, soul of mine to come alive" from "Nada" faded away, it was time to move into the second half of the set. It was a good one, with selections from every Roger Clyne and the Peacemakers album, except Sonoran Hope and Madness. Newer songs like "California Breakdown" blended perfectly with earlier releases "A Little Hung Over You", "Lemons", and "Hello New Day", the latter two songs bringing the crowd a little extra Jason Boots on trumpet.
The band seemed to have a little issue with their in-ear monitoring system, but they handled it like professionals, and most watching and listening probably didn't even notice. It's refreshing to see a band not dwell on a technical problem, but just go with the flow.
Once they got to the end of their set, they nixed the two songs they had planned as the encore, instead Roger gave lead vocal duties over to Jim Dalton. With the first chords of Neil Diamond's "Sweet Caroline", the crowd went nuts. The familiar Fenway anthem was probably the loudest of the night, and they brought the song to new heights thanks to a great rockabilly beat from P.H. Naffah, and Jim's incredible rendition of the classic song.
The band closed out the night as they did in Philadelphia by bringing out stage manager/tech Chris Kantor to perform Rupert Holmes "Escape (The Piña Colada Song)", and everyone, including bassist Nick Scropos, who took a walk through the crowd, and the members of Andrew Leahey's band dancing in the wings of the stage, really had fun with it.
Roger Clyne and the Peacemakers have returned west from where they came, but if you missed these shows don't worry, they'll be back again I'm sure. Until then, if you want to re-live the moments, or hear for yourself what I've just told you, the shows will be available for download at bandcamp.com 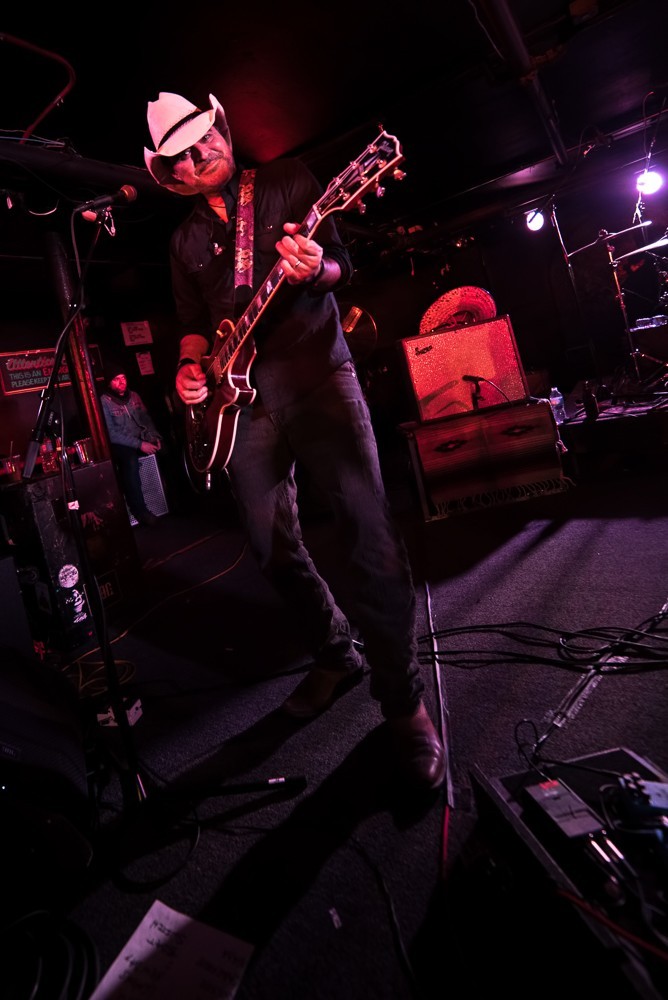 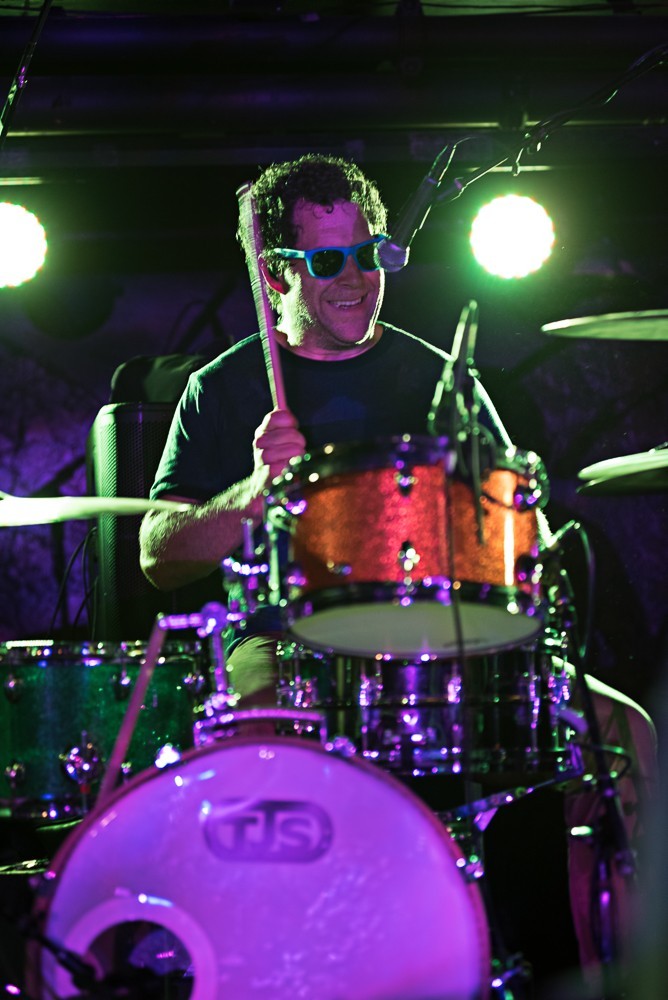 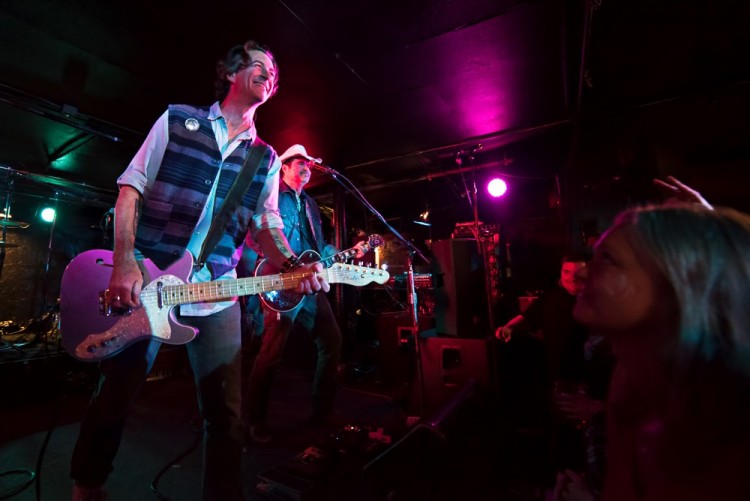 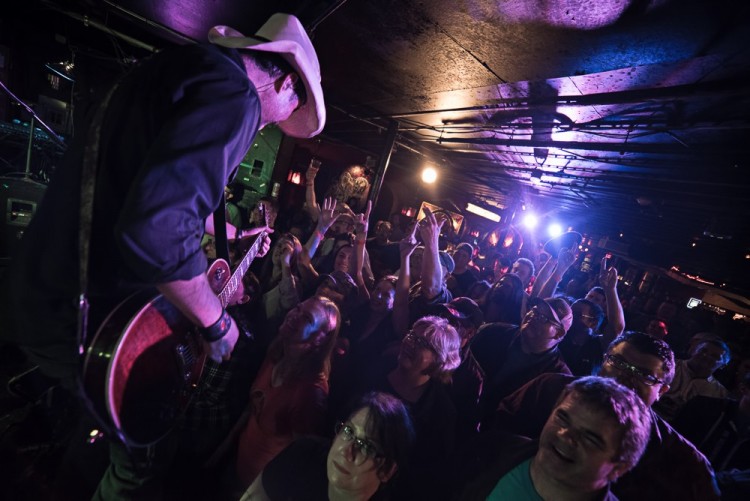 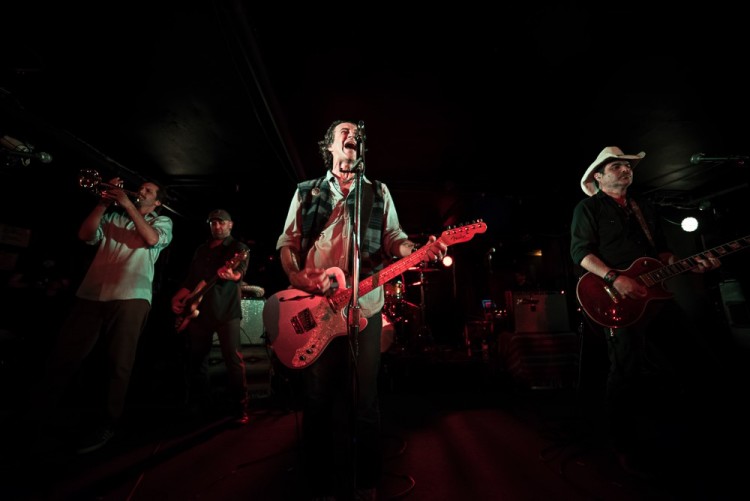